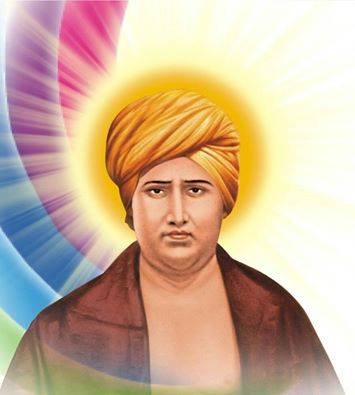 Swami Dayananda Saraswati was a great reformer in modern times. His life shows us all the qualities of a real Guru. Following incidents from his life shows his qualities which proves him as a real guru.
1.Dayananda a real seeker of truth

Father of Mool Shankar wished and tried to make him staunch devotee of Shiva. By his inspriration Mool shankar decided to keep fast, keep awake whole night and worship idol of 'Shiva' on Shiva Ratri Falgun Krishna 14, 1894 vikrami. In the Shiva Temple the crowd of devotees was busy in the worship process . But the third quarter of night all the devotees including the priests and Mool Shankar's father fell asleep. Mool Shankar observed a rat running on the idol and eating the offerings. The doubt flashed in Mool Shankar's mind how the idol could be omnipotent Shiva when even a rat could not be removed by him. He woke his father put the doubt before him but was not satisfied with reply. He broke the fast and returned home. This event made him clear about the futility of idol worship and he took vow of having darshan of the true Shiva.

2.Dayananda a great renunciator whose aim was (God) ishwar only

Mool Shankar started for the village Saila to meet yogi Lala Bhakt to obtain efficiency in yoga in order to conquer death and to have darshan of the true shiva. In the way Mool Shankar met some swindelers (thugs) who were attracted by the ornaments and costly dress of Mool Shankar. The Thugs pursuaded Mool Shankar to renounce the costly items. Mool Shankar was already in a mood of sacrifice, so he gave all these things to the thugs and proceeded on his journey on high mission.

3.Dayananda a true precher of vegetarianism

Maharishi was embodiment of pity and kindness. He never agreed to killing of animals for eating, as he preached that meat is not the natural food for man. One day a Raj Pandit of Tehri invited Maharishi for a feast. When Maharishi reached there, he saw a pandit tearing off and cutting meat. He was much disgusted. He at once returned from there.It was but natural for a person of his kindness and affection to show hatred for meat eating.he wrote ,"goukarunanidhi" in 1883,first book of its type for the very purpose of saving cow the "goumata" of we hindus for this purpose only.

5.Dayananda a real devoter of his life to humanity

After the completion of education of Swami Dayananda in the ashram of Swami Virjanandji, the moment of farewell from the Guru arrived.Swami Dayananda managed for a handfull of cloves and urged his Guru "Sir a beggar like me has nothing to offer as Guru Dakshina. Graciously accept these cloves and bless me." Guru Virjanandji replied " The country is suffering from ignorance, blind belief and other social and religious evils. Take the light of truth of Vedas and enlighten the humanity. This will be your Guru Dakshina."Swami Dayananda devoted his whole life in compliance of Guru's commands.

6.Dayananda a true liberator from agyan (lack of knowledge)

At Anoop Shahar a Brahman presented to Swamiji a betal. Maharishi accepted and ate it. There was poison in the betal and Swamiji remedied poison by yogic process of Basti and nyoli. Syed Mohammand a muslim Tehsildar (Sub-Divisional Officer) of Anoop Shahar was a devotee of Swamiji. He arrested the culprit and brought him to Maharishi. Syed Mohammad was surprised when Maharishi directed him to set the culprit free and said "I have come to liberate people from Bondage and not to put them in bondage. If evil persons do not leave their evil habits, why should we leave our good habits."

The magnetic personality of Maharishi, illuminated with celibacy and yoga, attracted the masses. Several incidents in his life proved his extra-ordinary strength of the body. One day in Kasganj, Maharishi was passing through the market with his servant Chainsukh. Two big bulls were fighting, and the people of the market, who were much affraid, advised Swamiji also not to proceed forther. But the undauting Swamiji kept going ahead fearlessly, and when the two bulls approached near him, he caught hold of the horns of each bulls with his hands and seperated them from fight. People were much astonished by Swamiji’s strength and fearlessness.Maharishi Dayananda possessed physique illuminated by celibacy. He very often preached about glory of celibacy. At jalundhar Sardar Vikram singh put up the querry of effect on Swamiji’s celibacy on his physical power. Swamiji kept silent at that time. Shortly after it, when Sardar Saheb was about to start in his carriage of two horses, Maharishi caught hold of the rear wheel of the carriage. Inspite of whipping by the driver, the horses could not move at all. When the driver and sardar saheb looked back they observed Swamiji’s grip of the wheel. Swamiji did this only to convince about the glory and greatness of celibacy

Maharana of Udaipur, a devotee of Swamiji offered him the priest hood of ‘Ekling Mahadeva’ with large property and very big annual income. The only condition was that Swamiji may not worship idol but should stop refutation of idol worship.In slight angry tone Maharishi replied “I can go away from the area of your state in one run but i cannot run away from God’s Empire. How can i stop preaching truth by such petty temptation.

Maharishi possessed a wonderful personality. By his deep learning and effective, fluent and authentic oration he attracted masses in thousands, yet he did not have the least element of pride and extended his affection and kindness to everyone who came into his contact. One day his devotee, Pt.Krishna Ram Iccha Ram suffered from fever. When Maharishi came to know about it, he reached his cottage and began to message his head. When Krishna Ram requestd him not to do so, the Maharishi with all affection said, "It is the duty of all of us to help and serve one another"

At the time of the advent of Maharishi Dayananda, ladies were not given the respect they observed. Study of the vedas and even high education was banned and custom like sati, child marriage, illiteracy were wide spread.Swami Dayananda had a high respect for ladies. One day Swamiji was going for a walk. There was a temple in the way where some children were playing, Swamiji bowed his head and when the colleagues asked the reason swamiji remarked “don’t you see, i have bowed before the four year old girl, semi naked, as a symbol of respect for motherhood.”

Having succeded in efferting change for reformation in the life of Maharana of Udaipur Shri Sajjan singhji, Maharishi Dayananda proceeded to jodhpur for the same purpose, ignoring the advice of his well wishers. During stay at jodhpur Swamiji came to know about the evil vices of Maharaja Jaswant singhji. One day Maharishi reached Maharaja’s palace all of a sudden, and saw a prostitute ‘Nanhi Bhagtan’ sitting by the side of maharaja, who seeting Swamiji approaching, arranged to send her off. Maharishi rebuked the maharaja by saying “Oh Maharaja! rulers are like lions and a prostitude is like a bitch. It is not proper for lion to be lured by a bitch, as it is against your dignity. This made Nanhi Bhagtan bitter enemy of Maharishi who conspired to poison Swamiji.

The uncompromising and firm preaching of truth by Maharishi made many people his enemy, who conspired to poison Swamiji.As per plan on ‘Ashwin - Krishna - Chaturdashi corresponding to 29th Sept 1883, the cook of Swamiji Jagan Nath served poisoned milk. At night Swamiji felt uneasy and he knew that poison has been administreted. He called jagannath and only said “you do not know the damage you have done for the public welfare, as by my death now, my work will be left incomplete” Having saidn this he gave five hundred rupees to jagannath and advised him to run away to Nepal. So unparalleled was Maharishi’ spardon to the person who fatally poisoned him.