Swami Vivekananda and Maharaja of Alwar 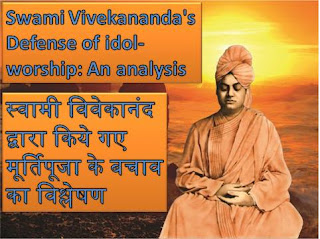 The following account is given in Swami Vivekananda’s English biography authored by
Swami Nikhilananda:
... He (Swami Vivekananda) had a sharp exchange of words with the Maharaja of Alwar (Mangal Singh) who was westernized in his outlook.… Next, the Maharaja ridiculed the worship of images, which to him were nothing but figures of stone, clay, or metal. The Swami tried in vain to explain to him that Hindus worshiped God alone, using the images as symbols. The Prince was not convinced. Thereupon the Swami asked the Prime Minister to take down a picture of the Maharaja, hanging on the wall, and spit on it. Everyone present was horror-struck at this effrontery. The Swami turned to the Prince and said that though the picture was not the Maharaja himself, in flesh and blood, yet it reminded everyone of his person and thus was held in high respect; likewise the image brought to the devotee's mind the presence of the Deity and was therefore helpful for concentration, especially at the beginning of his spiritual life. The Maharaja apologized to Swamiji for his rudeness.

Let us analyze the above incidence:
1) Idol worship is a subject related to worship of God. Since God is fundamentally formless entity, His image or picture cannot be thought of.

2) The picture of Maharaja is a physical object. It shows, displays or represents some of the physical characteristics of the physical body of the Maharaja. The Maharaja’s body being a visible thing can be very well seen with the eyes and so its picture or statue etc can also be made. But such thing is not applicable or possible in case of invisible Omnipresent God, who is a conscious entity devoid of all sorts of material characteristics.

3) It is true that the picture of the Maharaja reminds him, but this is correct only in case of those persons who already knew something about the Maharaja. Those who don’t know anything about the Maharaja would not get reminded at all just by seeing the picture of the Maharaja. For example: If a picture of Socrates is shown to an illiterate villager in India, he may not get any idea about his person. For him the picture fails to remind anything. Because he doesn’t know anything about that great person. On the other hand, if the same picture is shown to a high-school student, he will soon remind those things about Socrates which have been stored in his mind. So the basis of recollection is not the picture itself, but the knowledge already acquired before seeing the picture. The picture only clicks or triggers the revival process in the mind of the person who happens to see it.

4) Swami Vivekananda’s asking to the Prime Minister to split on the picture of Maharaja is not at all sensible. No one can expect such a baseless and irrelevant thing from the great Swami. The picture of Maharaja was not kept there for the purpose of splitting. It is not made considering that it would be used for splitting. For splitting spittoon (a vessel to spit into) is used, not the picture or statue of any person. Therefore, no sane person will ever be ready to split on someone’s picture.

5) Pictures, idols or statues of the persons are to be used sensibly. One must understand that ultimately they are insentient physical objects. So they are to be properly used, well kept, protected, preserved, repaired (if required), and appropriately displayed. But they are not the things to be respected or worshiped or honored or bowed down to. Worship of the idol is not the worship of God. Idol is not God. Except mere existence, which are the common attributes between the idol and Almighty God (Ishwar)? How can any idols however attractive or precious it may be, can represent the Almighty Omnipresent, Omniscient, invisible, formless God? How can the image bring to the devotee's mind the presence of God? Therefore, respect should be shown only towards the conscious individual or entity, and not towards any inert physical objects. The inert thing doesn’t and cannot acknowledge what someone is doing in front of it.

6) When a person possesses true knowledge, performs selfless (nishkam – actuated for the realization of God, and not for any worldly pursuits) actions and meditates on true God in a right way as outlined by sages like Patanjali, he is on the right path of God realization. Ignorance (or avidyaa or wrong beliefs) is a great hindrance.

by Bhavesh Merja
Posted by vedic wisdom at 5:17 AM