Hindu lost to Muslims due to Idol worship- What does History Teach us? 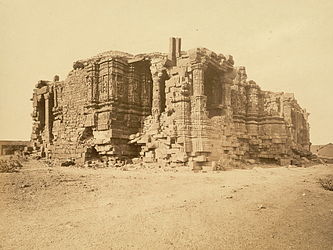 Hindu lost to Muslims due to Idol worship- What does History Teach us?


History of a country gives us opportunity to learn from our mistakes and decide for better in Future. It’s sad to say that we Hindus have not learned from our past. Idolatry was one of Major cause of loss to Muslim invaders by our Hindu Kings Idolatry and related superstitions were a strong reason. I am posting a small work up with authentic references from various sources to prove my stand that Hindu Lost to Muslims due to idol worship.

During the troubles that befell the Caliphate in the latter half of the ninth century, Sind, neglected by the central government, came to be divided among several petty princes, the most powerful of whom were the Amirs of Multan and Mansura. Such disunion naturally weakened the political power of the Musalmans, which had in fact begun to decline earlier in the century. For in the reign of Al Mutasim (A.D. 833-S42), the Indians of Sindh ' declared themselves independent, but they spared the mosque, in which the Musalmans were allowed to perform their devotions undisturbed. The Muhammadans of Multan succeeded in maintaining their political independence, and kept themselves from being conquered by the neighboring Hindu princes, by threatening, if attacked, to destroy an idol which was held in great veneration by the Hindus and was visited by pilgrims from the most distant parts. (Reference- Al Baladhuri Page 446)


But in the hour of its political decay Islam, was still achieving missionary successes.

Al Baladhuri tells the following story of the conversion of a king of Usayfan a country between Kashmir and Multan and Kabul. The people of this country worshipped an idol for which they had built a


temple. The son of the king fell sick, and he desired the priests of the temple to pray to the idol for the recovery of his son. They retired for a short time, and then returned saying,''We have prayed and our supplications have been accepted." But no long time passed before the youth died. Then the king attacked


the temple, destroyed and broke in pieces the idol, and slew the priests. He afterwards invited a party of Muhammadan traders who made known to him the unity of God ; whereupon he believed in the unity and became a Muslim.


(Reference- Page 223,224-The Preaching of Islam by Arnold Thomas Walker


When Mahmud of Ghazni attacked Somnath temple, it was razed to the ground, its priests and other devotees were humbled and reduced to a most wretched condition, and an army of hundreds of thousands of soldiers was put to flight by a force of 10,000 men. A pretty miracle indeed! The popish priests offered presents to the god, worshipped and praised him and addressed prayers to him, thus “O god of gods! Do thou destroy this barbarian and take us under thy protection.” They would tell their dupes – ruling princes: – “Do not be at all anxious. Rest assured, Mahadeva is sure to send Bhairava or Virabhadra for your assistance who will destroy or blind all these barbarians.” Or they would tell them, “Our god is sure to manifest himself presently. Hanumaan ,Bhairava and Durga have appeared to us in a dream and promise to do everything for us.”
Those poor simple Rajas were easily taken in by these popes. They believed in all that they said and, therefore, did not resist the invader. Many popes, who were astrologers, said that that was not an auspicious time for them to fight, because one said it was the 8th moon while the other said that the Yoginee star would face them (when they go to fight) and so on, they were altogether misled by the popes (and therefore they did nothing to defend themselves). When they were surrounded on all sides by the barbarians, they tried to escape from their miserable plight. Hundreds of popish priests and their dupes fell into the hands of the enemies. Their priests with folded hands implored the Mohammedans to spare their temple and the idol, and offered to pay Rs. 30,000,000 as ransom but the Mohammedans answered that they were not idol-worshippers but idol-breakers and off they went and began demolish the temple.
When the roof fell, and he magnetic rocks were shifted, down fell the idol which, when broken, was found to contain Rs. 180,000,000 worth of diamonds. They were told to point out where the treasury was. Through fear of punishment, they revealed everything. There upon the Mohammedans, having looted the treasury and thrashed the priests, made slaves of them as well as of their dupes.
They made them grind corn, cut grass and carry urine and feces but gave them nothing but parched grain to eat. Oh! Why did these people ruin themselves by the worship of stones? Why did they not worship the Almighty God whereby they could have put the barbarians, to rout and gained victory over them? Had they worshipped heroes and brave men in place of all those idols, what a protection they would have afforded?
The priests worshipped those stones so devoutly and yet not one of them shifted from its place, fell upon the head of one of the invaders and broke it. Had they served a single brave man as they did the idols, he would have done his best to protect those who had served him and to destroy their enemies.

In 8th century Mohammad bin kasim attacked Deval town of Sindh.
The Hindu king Dahir fought bravely. He was a follower of Devi and in his fort there was a Devi temple. He was having a belief that until the flag over the temple is flying he can never lose war. Raja Dahir fought very bravely and was about to win the war against invaders. Kasim came to know about this superstition of the king. Kasim bribed the temple priest to remove the flag. Next morning as the king went in the battle field the priest removed the flag of the temple. The king and his soldiers thought that the Devi was unhappy from him. So, he and his army lost their heart and finally the winning battle. Mohammad bin kasim killed the king and captured the fort. He killed the priest too saying if he can betray his own king why cannot he betray an outsider?  Kasim army broke the idol and destroyed the temple, raped thousands of girls, carried thousands of Hindus as slaves for sale in the slave market of Kabul. Kasim took two very beautiful daughters of king to gift to Persia

Idol worship had brought doom to we Hindus in the past. It had caused a big loss to human race. It’s time for readers to decide whether they want to learn lesson from History or they still want to carry on with superstitions related to idolatry.
Dr Vivek Arya
Posted by vedic wisdom at 12:50 AM